We had just left our station at the beginning of this night shift and were on our way to a call when I spied a someone having a spot of bother in the middle of the road ahead.

He was a young skinny man who only had one leg.  As we drew closer we could see he was having trouble keeping balance whilst using his crutches.  And in one epic finale his one leg flew into the air – closely followed by his crutches, resulting in a classic “banana skin” type fall. END_OF_DOCUMENT_TOKEN_TO_BE_REPLACED

Complacency;  A feeling of contentment or self-satisfaction, especially when coupled with an unawareness of danger, trouble, or controversy.

I was stood in the resuss bay helping a senior consultant gain I/V access to our patient via the jugular vein (central line).  Well, I say “helping” . . . I was merely stood to one side holding an ultra sound probe in one hand and a tube of lube in another waiting for instructions to pass them to the Consultant.  But I considered this form of “help” to be a team effort and deep down I was just dead excited to be involved, albeit on a menial level.

Our patient was sick.  Big sick.  He’d just been roughly diagnosed with Necrotising Fasciitis, or ‘nec fec’ as the Consultant liked to call it.  END_OF_DOCUMENT_TOKEN_TO_BE_REPLACED

Apart from being a superstar and all round general hero gold medalist (and a mod), Bradley Wiggins has been in the news recently for advocating the use of helmets whilst cycling. 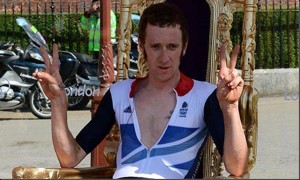 I was personally surprised at the back lash of retorts he got for trying to suggest folk wear cycling lids whilst on the road.  It seems that some of the arguements are based around allowing folk to have the choice to wear helmets and not forcing them to.

I’m a little devided on the matter . . .  END_OF_DOCUMENT_TOKEN_TO_BE_REPLACED

After five weeks away from working on a truck I managed to land my first job back attending a genuinely sick woman.  She was   and feeling in a bad way.

To make matters worse – for me anyway – it was a night shift and I had a throbbing headache.  And I hate nights!

The gave me a good hand over and as he did so I frantically tried to keep up and write the information down on my note pad (the back of my gloved hand).  The poor lady was an insulin dependent diabetic and her  was in the thirties.  She also had a chest infection and had been vomiting lots.  Put this all together and the poor lady was exhausted and certainly needed to go to hospital. END_OF_DOCUMENT_TOKEN_TO_BE_REPLACED

Hyperglycaemia:  This is where your blood sugar count reads over 15 – for an extended length of time.  Diabetics who aren’t managing to control there levels will inevitably end up with high counts (the normal being between 4 and 8).  A fraction of the symptoms can be lethargy and fatigue, excessive hunger (polyphagia), excessive thirst (polydipsia), excessive urination (polyuria).  If left unchecked a coma can be expected and eventually death.
Motorcycle Response Unit:  These are similar to FRUs but obviously go round on bikes.  Big bikes.  1300cc I believe.  And they carry a lot of kit on them making the bikes very very heavy.  So it comes to no surprise that there is lots of mirth and laughter when news befalls everyone that an MRU has dropped their bike.
A terminology used for measuring someone’s blood sugar count in their blood.  Usually done for Diabetics but in the emergency services, done to . . . . um, anyone really.  Very useful for diagnosing certain problems – like Hypo and Hyperglycaemia . . . or for ruling out diabetic problems with someone who is drunk or is suffering a CVA.