There were five of us, including the patient, all crammed into a tiny lift heading down to the ambulance from the 16th floor when . . .

The lift stopped at the 7th floor.  The doors slowly creaked open to reveal a mum, her gaggle of kids and a nan smoking a fag.

Everyone’s jaw dropped.  In the awkward seconds that followed we desperately tapped at the “Ground” button.  The kids, struck like statues, stared, as kids do, down at our patient.  Our patient, currently somewhere between the realms of alive and dead, did not stare back.  Instead, she lay suspended upside down in a MIBS stretcher whilst one of the medics “bagged” her from the side.  Her response to the kids staring was pretty good though – bile started streaming from both nostrils, over her forehead and onto the floor. 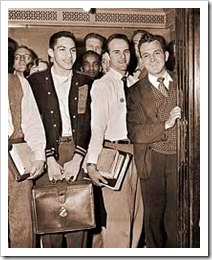 The doors slowly creaked shut again and we trundled on our way.

“I fucking knew that was going to happen!”  And that was it, no one could suppress their laughter anymore and we all burst into giggles.  The ludicrousness of our situation had caught up with us and was now just too much.

About an hour earlier I’d been called to a cardiac arrest and arrived at same time as the crew.  On the way up to the 16th floor they noted I had an EZ IO with me.

“Yeh, it’s been a while since I last used one hey”

The crew both grinned at each other . . . “Right.  You know who’s using THAT then eh”

As it was, we finally arrived and cracked on with our job.  The other medic immediately went to the head end to prepare for intubation leaving me to gain IV access.  The medic said afterwards that it was intentional – bastard!

However, with the fear of having to use the EZ IO (and probably drilling my own hand to the patient’s leg) as a back up, I got the cannula in first go.  Which, when I look back, I’m pretty sure was blind luck – but who cares, we were in!  And pretty soon after we had ROSC (Return Of Spontaneous Circulation . . . ie we had a pulse) . . . and a border line stable ROSC too.

Now we needed to think about egress.  That is, how the hell do we get a patient, who currently resides somewhere between the realms of alive and dead, down from the 16th floor of a set of council flats in a tiny lift without them suspending on you?

This is where HART (Hazardous Areas Response Team) come in.  HART have a MIBBS stretcher.  Something you’d expect to see Mountain Rescue using off the side of a cliff.  Perfect for our situation as we’d need to “prop” our patient up in the lift. 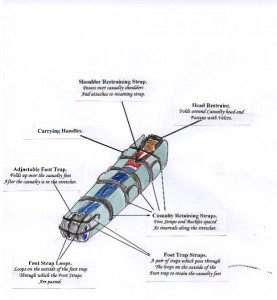 Before long, our patient was wrapped up ready to go.  Everything was cleared up, bags packed and sorted.  The only problem we had was the patient’s stability.  With a systolic BP of 88 and a thready radial pulse we decided the best option was to have the patient upside down thinking the journey down in the lift would be short and thus reducing the chances of our patient re-arresting.

So, with a few huffs and puffs we all jammed into the lift and started heading down until . . .

The lift stopped at the 7th floor.

Well, you know the rest.  And by the time we’d got to hospital?  The patient was starting to make respiratory effort and open their eyes.  A rather good job we all agreed.

Probably scarred those kids for life though but . . . meh.