It was another busy night on the JRU (Joint Response Unit).

This is the evening where we have one FRU per Police borough and are just tasked to Police related calls.  The logic goes partly and a little something like this . . .

Passerby calls 999 re something happening – eg drunk in street.  Police take up call, attend if they believe it may be relevant, also pass call to London Ambulance Service due to possible injuries/illness . . .

Police arrive and find said “victim/patient” is not requiring of any police assistance but because they are injured or ill (eg drunk!) they have to stay with them until LAS arrive.  This, under the LAS’s current circumstances, could take hours.  This means a police unit is unavailable for said time.
When the LAS do arrive, the injury/illness (eg drunk) may be so trivial it is easily dealt with – but means one of the much needed Ambulances now being unavailable dealing with said victim/patient.

But, with the JRU, we are either self mobilized (due to having a police radio) or mobilized via Control.  We now arrive within minutes and can triage on the spot – working out alternative care pathways for the victim/patient . . . often taxi home, or taxi to hospital.  We also use our very own tasked St John Ambulance to help with patient transfers (thus reducing further, the need for front line trucks).
This means the Police get to be released from the job quickly and we, in turn, free up as many of our ambulances as possible.  Win/win situation.
Simples.

JRU night can be busy.  Very busy!  This was one such night.

I was working the “Flag Ship” borough this night – the east London borough where it had all begun.  And the police were already calling for me on their radio to help with a suspected overly drunk female that a couple of plain clothes policemen had been lumbered with the task of baby sitting whilst waiting for LAS.  I confirmed my attendance to the call and quickly head off to their location.

Upon arrival though, my LAS and Police radios asked if I could relocate to another “more urgent” situation a couple of miles away where someone had a suspected arterial bleed in their arm (a future blog entry).  I exchanged glances with the two plain clothes policemen standing nonchalantly, either side of a woman sat, bent double at their feet.  They, of course, had heard this “urgent” request also and therefore had little choice but to allow me to go.  Their exasperation was obvious and with little comfort I promised them I’d try and find another JRU operative to come to their help as soon as possible.  I then sped off to deal with “bloody arm patient”.

An hour and half later and I was done on that job when Control asked me to re-attend the drunk woman case.

“What?  Have they still not had anyone attend?”
“No.  We tried to send one of the other JRUs but they too got relocated to something more serious.  Sorry”
“No worries.  On me way”

I then came up on the Police radio and told the units I was on my way.  For a second time! 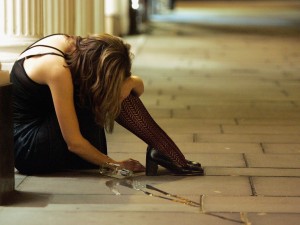 And when I arrived again, the plain clothes policemen were still planted in the same place with the woman sat asleep at their feet.  The two men had that look . . . sort of like when you’ve been angry, but it’s passed now, and you’re left with a seething boredom type look.  Anyway, it was obvious they were not happy.

I apologised for the delay and asked them for a hand over, which they quickly gave.

“This is Sandra*.  She’s 28 and has drunk lots of alcohol and has been unresponsive since our arrival.”

I knelt down to Sandra and placed my hand on her arm.

“Bit drunk,” she said with an apologetic tone in her voice, “can you help me up?”

I did so and Sandra stood there for a few seconds – on her own – before stating her final request.

I flagged down a London Black Cab and helped Sandra into it.  Sandra gave her address to the driver, thanked us and then her and the driver sped off into the distance.

I turned to the plain clothes policemen and smiled.  I think they smiled back.  It might have been a grimace – I’m not particularly sure.  Either way, they left almost immediately . . . with slightly more exasperation than before.