Over the police radio we could hear carnage and mayhem.  Someone, somewhere, was being stabbed.  Multiple times.  And it was happening right now.

Over the top of police shouting for urgent assistance, were the screams of anguish, pain and despair.

Terry was brand new to our Unit and tonight was his first ever JRU shift.  Terry nodded back and started the engine! . . . 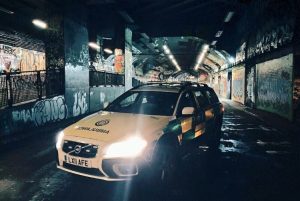 He then put his seat belt on and carefully adjusted his seat.  Then the mirror. Satisfied, he plucked his reading glasses out of his top pocket and placed them over his nose and looked up and down at the MDT computer screen trying to adjust his vision.  Not satisfied he reached up and turned on the internal light.  Terry then searched through the MDT to locate the job on the map and spent a few more seconds working out his route.  Satisfied, he sat back and made himself familiar with the controls before checking his mirrors and signalling to pull out.

Terry then casually pulled away and headed to the job, barely breaking the speed limit as he did.

You see, Terry was an Old School medic.  Albeit new to our unit and JRU, he certainly wasn’t new to the Service.  Terry had been in the job longer than most medics were old – 35 years and counting.  Probably a thousand years old himself and bore a striking resemblance to an old Yoda.  Terry had been around the block – done HEMS twice, been in SF Reserves and was first on scene at one of the 7/7 bombing locations to call it in as a Major Incident (whilst rolling a cigarette, depending on which story you listen to).  His glazed expression of calm solitude was well and truly fossilised into place.

No one was ever going to tell Terry to move any faster than he intended!

And thus, arriving on scene to deal with the patient with multiple stab wounds it somehow quickly twisted around and ended up being me who was the trainee and Terry the one mentoring!

With not even an ounce of worry in his voice, and (I imagined) with one hand calmly rolling a cigarette, Terry guided me through saving the patient.  From initial scene safety, haemorrhage control, dressings, access, and tranexamic acid**

How the hell did that happen!!!

Afterwards, and whilst he rolled another cigarette, we joked and laughed about it.

“I could tell you was getting agitated,” he chuckled, “I could see you pushing your foot to floor as I was pootling off to try and get me to go faster.”

He chuckled some more and smoked his fag.

Terry is still with us on our team.  A proper old school medic with good character.  Nothing ever phases him.  An asset to the service and one of the “old timers” who have managed to keep with the many changes and make it work for him. Certainly don’t make them like him anymore, that’s for certain.

*not his real name of course
**https://www.drugs.com/cdi/tranexamic-acid.html