It was a late finish.  Again.  And as my student and I slowly headed back to station very little words were spoken.  There was a numbness in the air that seemed to choke any delight that would normally be taken in witnessing such a beautiful sunrise over the city.

As we rounded a corner the blinding golden light of the climbing sun spread across us like a wave of warm tropical surf.  Turning on the radio to break the awkward silence, Bob Marley’s song, “Everything’s Gonna Be Alright” sprung into life.

And, as the dawning of the new day poured its beginnings across the waking city I reflected painfully on the job we’d just done . . . 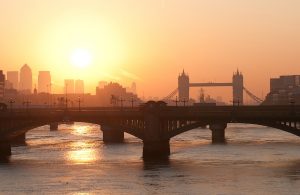 I was counting down the minutes to the end of the shift when the Police started making it obvious on the radio that there had been an RTC, and that someone was hurt – bad.  And as we headed to our car the job started coming down onto our MDT – RTC, Car vs pedestrian, CPR in progress.

Those last three words always sends shivers down my spine.  Especially if it’s coming from the Police, you know it’s going to be genuine.  So, seat belts on, engine started, and off we raced.  En route we confirmed our attendance on the radio and acted as liaison for both the Police and our Control.  HEMS came through also and confirmed they were right behind me (thank fuck!) and asked for a sitrep as soon as I could.

As we got closer, and in between radio comms, I reminded my student of the acronym C.O.M.A.* for focus on their duties, as I would go through the process of C-ABC.  The scene grew closer and we were met with the inevitable chaos – to our left was a police car parked skew whiff in front of a group of Police, all of whom were grouped round the patient.  CPR was indeed, in progress.  To our right, opposite the patient was a van, parked half on and half off the pavement.  A large distinct bullseye smash had folded in the windscreen and the A-post was bent at nearly ninety degrees.  Several other police were gathered round the van’s driver attempting to calm them as they screamed hysterically.

Driving carefully through the carnage, my eyes followed the unmistakeable skid marks of the van all the way back to one of the patient’s shoes where it was dimly lit by the street lights – about thirty feet away from where the patient lay. The patient had been hit so hard, they’d been knocked clean out of their footwear.

Being extra careful not to touch or move it, we parked by the shoe, grabbed our stuff and rushed to the patient.  The next section is partially a blur – I stood and stared, for what seemed like an eternity but was in fact, probably only a second.  CPR was effective, as it always is with the Police.  But the patient, I recall, looked dead.  Something inside was saying this was futile.  Certain parts of the anatomy just shouldn’t look like that.  But, because it wasn’t blatantly obvious “incompatibility to life” something had to be done.  And thankfully, that something was eventually done by the HEMS crew and Advanced Paramedic who arrived moments later.  In the interim, I hadn’t done much, apart from bark some incoherent orders, fail to secure the airway, fail to get the pads on the patient and generally flounder.  The HEMS and AP however, took over with the rapid and unhesitating clockwork skill that befits their level of expertise.

Sadly, even with the finest hands on scene, giving the patient the best chance possible, they were called within minutes of starting.  The final rhythm strip of asystole was printed out on our Lifepak machine signifying close of play for the fight for the patient’s life.

Thus ensued the normal clean up process following these incidents.  Whilst my student and I cleared up the clinical waste and repacked the car we noticed that the driver of the van across the road was still overwrought with hysteria.  Despite the driver’s obvious wrongdoing, the police continued with their relentless compassion to try and calm them.  The driver’s current way of living had been brought crashing down and from this point forward their life would never be the same.

The traffic police had arrived and were busying themselves photographing the scene and making sure items weren’t moved.  I mentioned the shoe to one of the officers and he came over and sprayed a circle around it signifying to all not to move it.

There was a hot debrief with the HEMS Doctor and all present, a few questions asked and then we all dispersed and went our seperate ways.

Eventually, we drove away as the first rays of dawn began to spill across the city skyline.  And as we listened to “Everything’s Gonna Be Alright” by Bob Marley on the radio, I thought of the bitter irony in the lyrics.  We’d be in bed in a couple of hours, but for the two people involved in this RTC at least, nothing was gonna be alright.

I believe whole heartedly that we should never ever forget the jobs we didn’t do well at.  And that we should always admit our faults and reflect accordingly – else there’s no chance to improve and move on.  I also believe, in contrast to this, we should never dwell too long on them either – else it will take control and drag us spiralling down into the pits of self pity and despair.  It’s a fine line and I often wonder how some folk manage to avoid it so easily.

8 thoughts on “Everything’s Gonna Be Alright”