“QUICK!  Someone’s being beaten up! By five men . . . over THERE!”  The old man looked frantic and genuinely concerned.

I was about to take the first sip out of an extra hot, posh, independent artisan cappuccino that I’d just purchased.  As such, I wasn’t overly impressed by this rude interruption.  So, just like the fishing pilot at the beginning of Raiders of the Lost Ark, who had the dilemma of finishing catching his fish or starting the plane to escape, I toyed with my coffee for a few seconds before exiting the FRU in a grump to see what was up. 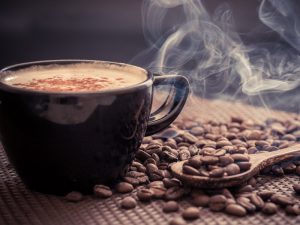 I was parked at a busy tourist section near the centre of the city and it was a gloriously sunny day.  As I exited the car, an Urgent Care Ambulance randomly arrived with its occupants asking where some toilets might be.  But, seeing as they arrived at same time Old Bloke was shouting about an assault, they sadly got themselves equally involved.  No way was I going to go steaming in, fisty-cuffs up against a mob of slavering psychos alone.  No way, not with my back and fat gut.  I quickly looked the crew up and down . . . yep, I’d be letting ‘fit-as-a-fiddle-muscle-man” and his ‘looks-like-nearing-retirement-age-and-barely-5’2″‘ crew mate in first.

Both Old Bloke and his wife, were pointing to a corner sports shop less than 100 yards away and frantically saying that the person in question was “literally just now, being beaten up outside there!” with the added final sentence, that always hits below the belt, of “please, do something!”.

So, en-mass, we headed to the shop where we tentatively peered inside to ask if everything was ok.  A couple of spooked shop assistants, recognising our uniforms, pointed downstairs to the basement section of their shop.

Doubling back from the bottom of the stairs we headed through a short tight corridor, barely wide enough for one person, to a back end room where we found our “patient”.  He was a young man, and appeared to be sitting calmly and quietly on a bench by a rack of shoes.  Three members of staff were stood around him and nothing in the situation appeared to be remotely violent or mob like.

As 5’2″ lady approached the “patient”, muscle-man tapped me on the shoulder, “I’ll go and let Control know we have a Running Call”.  I nodded and then continued to concentrate on the odd situation.

It quickly transpired that all was NOT as it seemed.  Our “patient” was in fact a shoplifter whom, the staff had somewhat publicly arrested before he was able to make a get away.  Now they had him down in this back room and were monitoring him until the police could arrive.  And, before all this information was out, the “patient” made a bolt for it!

In his way however, was 5’2″ lady, stood just in the back room, and myself, currently at the far end of the tight corridor.  Well, poor old 5’2″ lady was bowled over in a nano second, leaving my fat carcass to take a full on charge from the “patient”.  And, as quick as a 100m dash from a Sloth laced up on diazepam, I attempted to jump out the way.  This, of course, failed spectacularly.

I truly think my size gave an edge to the situation as the “patient” simply came to a sudden halt when he hit me full tilt.  This sudden break in the escape gave the staff members a chance to rally and come piling in.  What then ensued was a horribly undignified explosion of arms, legs, sweat, spit, teeth and foul language as we all attempted to control the “patient” and stop him from a) killing anything in his path and b) escaping. 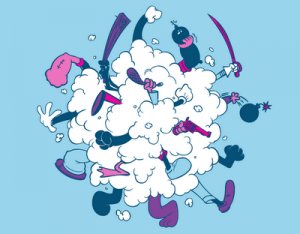 What seemed like hours was simply seconds.  And in our flailing attempts to hold the “patient” still, there suddenly appeared muscle-man, back from talking with Control.  In one step he was on top of the patient and had him in the most bizarre of hand/arm locks.  The staff members and myself stepped back to leave muscle-man to hold the “patient” in place.  His crew mate, 5’2″ lady supported him by diving on the “patient’s” legs in a brilliant display of limb control.  Between them they had the whole thing under control.

At this point I thought it best to act as “comms” and seek urgent help on the radio.  So, bent over double and gasping for breath, with a voice both high pitched and pathetic, I fumbled with my handset called Control . . .

I followed with our current address and details before sinking to my knees and coughing up a lung.  Muscle-man knelt confidently and calmly in place with the “patient’s” arm in an odd position.  Every now and then the “patient” would struggle and cause himself pain.  Muscle man was kind enough to explain the recurring problem for the patient . . .

“PLEASE DO NOT RESIST SIR.  YOU ARE CURRENTLY BEING HELD IN A RESTRAINING POSITION THAT IS DESIGNED NOT TO CAUSE DISTRESS SHOULD YOU CHOOSE TO REMAIN CALM.  IF YOU MOVE HOWEVER, YOUR MOVEMENT WILL CAUSE YOU PAIN.  PLEASE REMAIN CALM AND STILL.  I AM TRAINED IN RESTRAINING TECHNIQUES”

Well, as surreal as it all was, I couldn’t argue with that.  And, with little old 5’2″ lady laid calmly across the “patient’s” legs, muscle man knelt defiantly over the “patient”, me slowly dying of breathing related issues in the corner, and at least five fit young members of staff stood around amusingly looking on, we must have looked pretty awesome.

Within minutes, the police arrived and the “patient” was taken in to custody.  We all gave statements and eventually emerged back in to the sunlight to return to our vehicles.  Waiting on scene was a Team Leader who did a quick ‘hot debrief’ and welfare check before we all went our seperate ways.

Before leaving though, I had a quick word with the Team Leader.

“Those two were awesome by the way.  They completely controlled that situation and deserve some form of recognition.  Can I email you with my thanks to them and recommendations for them to receive some sort of award?”

The Team Leader agreed and I did follow through with the email.  However, I never did hear anything about it and to this day, I have no idea if they ever did receive the recognition they deserved.

Still, the main thing was on that, I managed to get myself a replacement extra hot, posh independent artisan cappuccino – and drink it.  Which was nice.

4 thoughts on “Stopping a thief”