The LAS went out on strike last Wednesday, being one part of many public service workers to do so. 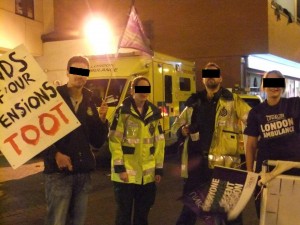 Random strikers with identities protected to protect their identities!

I’ve never been on strike before and so this was an interesting position to be in.  To me, striking was nothing more than clashing violence between Thatcher’s police force and the miners in 1984.  An old fashioned socialistic movement of solidarity versus oppression.  Well, that’s what I’d always thought at least.  Call it ignorance, call it naivety, call it what you will – I just never really understood the meaning of strike action until now.

For those who didn’t understand what was happening, here is the briefest of synopsis’s . .

There is obviously a lot more to the reasons than just these few lines but it’s difficult to go into further detail without adding personal opinions.  And I want to try and keep from doing that.  However, I welcome other people’s views and opinions.

My visions of picket lines had been from the 80’s when people wore Donkey jackets and huddled round flaming metal oil drums clutching mugs of steaming hot tea in their fingerless gloved hands.  So, when I joined the picket line I was disappointed not to see the Donkey jackets but, was glad to see an old metal bin with a fire in it and half our work force spread joyously along the front of the Station – with inevitable mugs of tea welded to their hands.

I quickly obtained a cup of tea, donned my Unison T-shirt and joined the picket line.  After saying hello I felt it necessary to hold my fist up and shout, “Solidarity bruvvas!  Sisters also!!”

There was a pause as I received blank looks and I smoothly changed from holding my fist up to scratching the back of my head and waving to passing traffic.  I clearly wasn’t very good at this.

The mood was positive throughout the day.  Traffic went passed and hooted their horns constantly in support – or at least we thought it was support.  This was East London after all and for all we knew the tooting could be pre cursors to a road rage killing.

There were only a couple of anti-strike shouts from motorists – to whom all received resounding cheers.  One was the inevitable, “Get back to work you lazy bastards!”.  The best cheer however, went to a posh chauffeur driven Audi with a number plate that resembled “ASS OLE”.  As they drove past, the business person in the back, with a look of contempt, calmly extended his middle finger to us in utmost defiance.

There were several roles that were monitored by our Union representatives and everyone was asked their intentions upon arrival at the station.  These were;

There were several voluntary crews throughout London which meant we were still responding to emergency calls.  No one wanted to see anyone unnecessarily missing urgent treatment and we monitored all 999 calls closely.  The comradery was fantastic – at one point, a volunteer crew were about to leave the station to go to a very serious incident.   As this would normally require more than one crew attending the scene it left our strike force with an easy decision to make – and as such, one of our members jumped up on the truck to join them.  If he hadn’t of done it, there were certainly another thirty willing to do so in his place.

I found out as the day went on that David Cameron had down played the strikes calling them a “damp squib” and stating that there was “full Ambulance Service” throughout the day.  Without becoming political or taking obvious sides – this was rubbish.  Control were hit hard and the level of calls being held were immense.  Even with the voluntary crews the Service was understaffed.  I fear Cameron was using media relations to underplay the day of action.

Reports coming back from crews were also good.  With no complaints from patients about being kept waiting.  In fact, some patients didn’t even know there was a strike on but, as soon as it was explained to them, they would show their support and some were even heard to say, “good for you guys, about time”.

Cameron also mentioned that “the stikes are futile”.  And a lot of people in the private sector say the same.  Who knows – even if they were, is this reason to simply sit back and take a corporate shafting?  Should any of us allow this sort of thing to happen?  If there is something the day of strikes has shown me it is the ability for people to unite – even if the odds are stacked against them.  It has shown me that no one person should feel segregated and that no individual or group should feel repressed.

Will there be more strikes?  I don’t know.  Perhaps.  Probably.  Will I strike again?  In an instant.

NB The food throughout the day was spectacular!  Praise to the folk who cooked breakfast for the masses AND worked on the voluntary crews.  Praise also to the Union reps who were there for at least 24 hours!