I went to a stabbing the other day, whilst on the FRU.

Well, I say I did . . . in reality, it was an ambulance crew from way out East who got to them first.  I  was racing up and down a street just one block of flats away trying to find the patient (I’d been sent to the wrong location!).  It wasn’t until several minutes after I’d done the seventh lap of the road that Control finally told me that the incident was ‘just the other side of the flats from you’.  I think bystanders on the street were secretly glad I was going.  Being smiled at and asked over and over whether they or any of their friends had been stabbed recently must have started to appear slightly unnerving after a while.

So, racing round the corner I found the tell tale signs of a serious incident;  lots of police, an entire road cordoned off and lots of flashing lights . . . ah, I thought, that’s more like it.

The ambulance crew, as it happens, had coincidentally stumbled upon the incident – a young teenage lad, stabbed once in the abdomen and once in his arm.  The first thing I noticed (other than the primary survey confirming to me that everything was in order) were the dressings on both the wounds . . . Israeli Dressings! 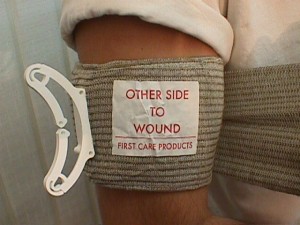 A combat dressing designed to apply pressure onto a wound and help staunch the bleeding. It can also be doubled up to be used as a torniquette. The strap gets hooked through the crescent clip and then acts as a 2:1 pulley to apply direct pressure onto the wound.

They both looked at the dressings and nodded their approval.

It was good.  Good that the police had quality dressings to deal with emergency situations like that.  Now I came to think of it, even the LFB have dressings of similar standard also.

Yet we don’t.  It seems to me, following in the tradition of causing as much torment and misery to our patients as possible, the dressings we have are woven from a fine mixture of ground glass and chopped razor blades delicately laced together in a glazed mesh of formic acid.  Its not uncommon for an ambulance crew to arrive on scene and find a patient’s wound already neatly wrapped in a field dressing – only to take it off, re-open the wound, poke it a few times and then wrap it back up in one of our all purpose, pain inducing pads – which seem to be about as much use as the public toilet paper of old – you know, the stuff that everyone was convinced was made of tracing paper.

We all stared and nodded approvingly for a little longer, in much the same way we would admire an old ’65 Ford Mustang GT500 Shelby as it drove past.  Snapping back into reality I smiled at the crew, exchanged call signs and headed back to the car.  Stopping mid way, I swung about on the spot and headed back to the truck.  I’d forgotten something.  Knocking first I poked my head in and nodded toward the patient.

The crew stopped playing with the Israeli Dressings and looked up at the patient.

I shut the door again and headed back.  My work here was done.