Apologies for the delay in getting this one written up.

I’ve been to the carnival before, as a punter, but this was probably ten years ago.  However, I’ve never worked it and the only thing I could draw experience on was the knowledge that it was going to be crowded.  Very crowded!

In terms of strategic organisation, both for the event organisers and emergency services, it was air tight.  But that didn’t mean some parts were a little rough round the edges.  Take our briefing for example, short, sharp and left me slightly bedazzled.  I couldn’t help think about the Black Adder sketch where Lord Flash Heart gives his flying brief to the new recruits.

And then we were off as one of many three person Mobile Response Teams who walked around designated ‘zones’ within the carnival with large response bags on our backs.  My crew mates consisted of two lovely ladies who pretty much looked after me throughout the day – especially as I didn’t have a clue what was going on most of the time.  There was Bev*, a ‘tech 4’ who had more experience in this sort of thing than I had as a medic in the service!  And there was Alice*, the St John’s contingent.  Alice knew the carnival inside out and was our guide for everything. 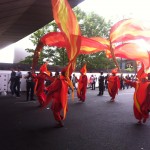 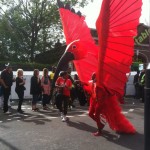 The carnival was huge.  Vibrant colours, fantastic sounds and wondrous smells filled every space.  You couldn’t help but get sucked into the joyous vibe of it all. 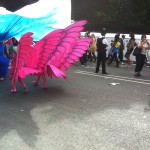 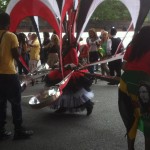 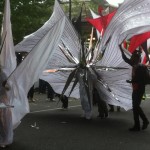 However, even though the police presence was huge, I couldn’t help feel a bit of a target in our bright green and yellow outfits.  So, feeling a little nervous at the start I strategically sent my crew mates in front of me.  Any trouble that would happen ahead of us was bound to come into contact with them first.  This, I felt, would give me ample time to drop my bag and run.  Of course, I used the “leader always goes to the back” excuse when asked so as not to cause distrust or alarm.

This did mean I was prone to ‘attack’ from the sides and the rear.  Well, that was ok too, as I had my plan of defense sorted.  It was a tried and tested approach that consisted of me placing my hands over my face and screaming as loud as I could;

To make matters even more embarrassing, we had the official LAS photographer with us for half the day.  And like all press photographers, he seemed hell bent on taking shots that would guarantee your worse look.  No matter how much he pleaded with you to “be natural” it would still look like something large had crawled up our arses and bitten us from the inside.

So, around we walked.  And walked.  And walked some more.  Occasionally, Alice would lead us through the hoards to one of the many strategically placed St John’s mobile treatment centres.  These turned out to be little oasis’s that we could take our bags off and sit down for a few minutes before carrying on.  But, carry on we must. 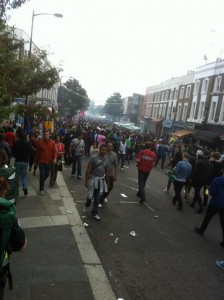 Pretty soon though we had our first patient.  It was a group of young lads who ran up and surrounded us in a second.  Damn!  My first plan of retreat was thwarted.  I was just taking a deep breath ready to scream, with my hands over my face when I noticed that they weren’t actually here to kill us but needed some help.  So, stepping out from hiding behind the girls I bravely moved forward to deal with the patient.

He’d cut his finger.  Bless.  I wanted to pat him on the head but feared reprisal in the form of a good kicking.  So, I put a plaster on his finger . . . well, I say I did, it was Alice.  She was wearing this multi-pouched yellow vest which was more like a Mary Poppins bag.  I never once had to open my bag throughout the day as she had everything in her pouches.

And sadly, this is how our day continued.  Minor injuries mixed with drunks needing help.  Very simple.  It seemed that all the serious jobs throughout the day were distributed to other units.  There were a few stabbings, some falls and even a cardiac arrest (I believe), but no deaths.  Everything was dealt with effectively and accordingly which I do believe meant it made for a good year.

Eventually though, the day turned into night and by 23.00 the streets were practically empty.  The police presence was huge – but at the same time very hidden.  They played a passive role but were always only inches away from anything.  They had the day nailed down from the start – empowering the people to believe that the day was theirs.  Don’t think it could have been played better. 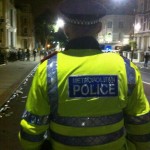 Our radio began rattling away as Control started calling each unit to return to base one by one.  Once we’d got our call we headed off along the quieting roads.  An ocean of litter, discarded food, broken bottles and generalised rubbish paved our way back to base.  The stale stench of spilt beer and fetid urine hung in the air and threatened, with every breath you took, to burn your insides with a pungent mix of yeast and ammonia. 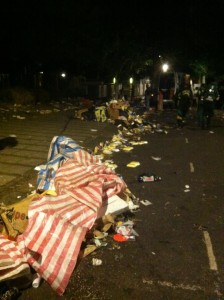 The day had been good.  It had been fun, and rewarding – in a strange way.  But now it was time to go home.  Our feet and shoulders hurt.  So, after doing all our admin, we said our goodbyes and headed away. 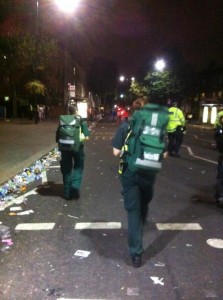 Would I do it again?  Yep.  I reckon I would.  I might even know what I’m doing next time.

*not their real names of course.