I’ve got into a little habit of doing silly charity events of late.  So when a work colleague, Martin Lewis, approached me with an idea he had for a charity ambulance pull, from Hackney to White City, I thought to myself, how could I refuse.  Especially as it was for Children in Need.

And thus started the long bureaucratic journey in getting this event into fruition.  Thankfully, I kept well away from the main politics and left this to Martin, who, under all the circumstances managed to pull the proverbial rabbit out of the hat.

I just sourced the harnesses and rigging . . . and thanks has to go to Pet Rescue for this – sorry, the London Fire Brigade.  For, without the kit, we couldn’t have done it. 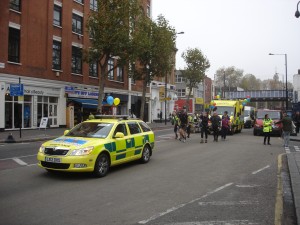 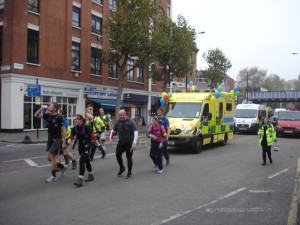 There is not much to write about this day other than it was a huge success.  On the whole, there was a general amazement at the difference in charitable givings between the suburbs of Hackney and the London’s City Centre.  Hackney was ridiculously generous . . . the city?  Well . . . . . some were great but most “suits” were as tight as a fishe’s rectum – par example:  one London black cabbie stopped and gave us about a fiver in shrapnel – whilst his four passengers, dressed in expensive banker suits gave a pound.  Between them.  Nice.

But I can’t moan.  I shouldn’t. No, thanks must be given to everyone who gave . . . I just made sure those who didn’t give had their cars keyed!* 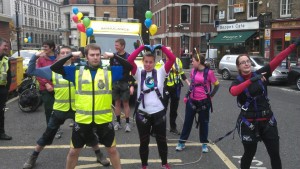 The professionalism and strength just oozed from our souls

On the latter part of our journey I rigged it so that ten people could pull the truck at once.  A long gradual up hill section shortly past Lancaster Gate saw the pulling crew tucking forward, heads down and giving the pull some proper elbow grease.  All bar two folk at the back who seemed lost in romantic conversation with each other – one of whom hadn’t broken past a ten degree angle or even a sweat.

And when the strain was to the point of everyone else being at 45 degrees he had the audacity to pipe up nonchalantly,

“This is all quite easy isn’t it”. 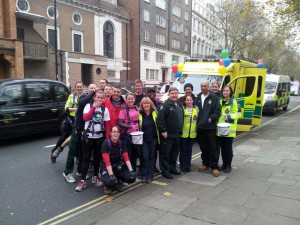 Ready for the last leg

However, the day was great.  Great banter, great company, great atmosphere and wonderful donations from people giving generously.  We almost doubled our target of a modest £1500 with nearly a £1000 being collected en route.  I think its a bit pointless in trying to mention everyone who you could thank for the day – but you know who you all are . . . from supplying everyone breakfast in the morning, to collecting cash on the way, to providing safety back up (and liaison officer!), to folk pulling the truck, to TFL, the police and of course the BBC who eventually allowed us through their gates and twenty yards onto their premises – it was great. 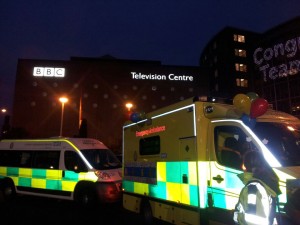 If we went any further onto their grounds, BBC funding would have been used to shoot us on the spot

It was fantastic seeing so many people get involved.  And with the right tweeking we could probably make at least double the amount next time.  But one thing really stuck in my mind when we had finished.  Something that highlighted the commitment and unity of an event such as this.  It was something one of our union chaps mentioned in passing.

“Great day.  It’s great to see our Ambulance Service all pulling in the same direction for a change eh”

And, as he said it, he gave that sort of cocky sideward glance that someone gives when they’re trying to see if you’ve noticed the deeper meaning to something.

How genuine and true.