Yes.  You did read that correctly.

Marvin and I were practically on top of the address when we got “pinged” down this job on our .  It took us barely a second to recognise the address as being the one right next to us.  And, realising that we could (and probably would) be cancelled off this, due to it’s “non life threatening status”, we decided to bomb it round there as quickly as possible and press ourselves “red at scene” (can’t be cancelled).  I mean, how could you turn down an opportunity to deal with this!

At first, when we knocked at the front door, we thought we had the wrong address – as we were greeted by a rather confused young man looking us up and down.  But then our patient emerged from his bedroom and embarrassingly ushered his flat mate away.

And, after repeated assurances to his flat mate that everything was fine he quickly beckoned us out onto the balcony, shutting the front door behind him.  He went to open his mouth and speak but instead, did a double take as he glanced down into the forecourt below.  Parked in the middle was our truck, our lights still flashing away and reflecting off the surrounding flats (clearly, we were fearful of blocking in other residents – safety first).  Our patient looked back at us with a desperate look on his face – and whimpered.

“They said you weren’t going to be coming . . . and that I should make my own way”

“Ah.  I see.  Sorry sir.  We were literally driving past when we got this job . . . it was sadly too late for them to cancel us down I’m afraid”

Both Marvin and I maintained a cool and stolid composure, “Of course sir, let’s go to the Ambulance shall we?”.  We stepped politely aside and allowed our patient to lead the way.  Once in the safety of the truck our patient came clean and explained all . . .

“What have you managed to do?”  The stolidness remained.

“Here, I’ll show you . . . ” at that he stood up and dropped his trousers to reveal a small ‘hand-cleanser’ bottle stuck over his penis. 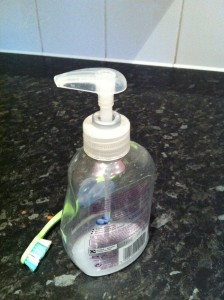 How the hell he’d got something so small onto his penis was quite a mystery to Marvin and I, but it certainly was stuck.  The thick hardened plastic rim was acting like a tourniquet allowing main blood flow to the end of the penis but not allowing it to venously return.  The result of which was slowly “ballooning” the end of penis within the bottle.

Marvin and I exchanged looks and then smiled at our patient.  He wasn’t that stupid to not recognise the subtle mirth behind our eyes.  And smiling back he shrugged his shoulders.

“Well, there’s nothing extra we can do eh.  I guess we’ll just have to drop you off at hospital I’m afraid”

With that his shoulders finally dropped as if in submission.  And, by the time we’d got to hospital, his ‘distal’ penis had swollen so much it fit the inside of the ‘shoulder’ of the bottle and had turned a very odd colour indeed.

It must of hurt.

“Mobile Data Terminal”. Sounds like it should be something mega technical but it isn’t.  It’s the on board computer screen that keeps us updated with our jobs.  It keeps track of all our times too.  This is important for keeping ORCON and keeping the government happy.