My crew mate Matt* and I stood in the kitchen waiting for our Duty Officer to deliver the final decree to the patient sat in the living room.

We burst into giggles.  In protest to her impending forced removal our patient had decided to express her disdain by belting our Duty Officer on his arm with one of her crutches. 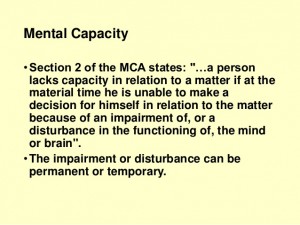 I take the Mental Capacity Act serious.  I mean, to remove someone against their will is not a pleasant thing to do, under any circumstances.  It’s ugly and goes against everything I believe is right in helping someone.  Anyone who disagrees with this is either treating the MCA wrong or treating it with contempt AND is using it wrong.

I try to avoid it at all costs . . . however, it is inevitable in this line of work that such patients will eventually be presented to us.  And unfortunately, this women racked up as being my third ever patient to be taken to hospital against her will.

I will not go into the finer details but rest assured; she could not retain information, she did not collate the information relayed to her, there was a medical issue that could both be a route cause of this lack of capacity and also needed urgent attention and there were no suitable alternative pathways open to us.  Oh, and alcohol was on board (the patient, not us!).

And because I take these issues seriously and hold someone’s will in such high regard my crew mate and I both decided that we’d rather have a Duty Officer here to help with the decision.  Don’t get me wrong, the decision was right – but on a wage packet somewhere within the arguable regions of Band 5, being suddenly presented with the prospect of forcing an individual out of their own home against their will and wishes – well, I’d much rather everything was water tight with procedures and seek the help of Senior Management.

So, after arriving and hearing our comprehensive hand over and viewing the our medical observations, the Duty Officer agreed with our plan of removal.  It was then that he decided to act as chief herald and promptly recieved his turt response in the form of physical assault.

He retreated back into the kitchen with us, nursing a bruised arm.

Our giggles turned into laughter.

As daft as it sounded – three grown men being “scared” of an 80 year old drunk woman that is – it was a wise decision.  Often, the mere presence of the police is usually enough to calm a situation to aid the smooth running of an event.

Thus, eventually, four officers arrived to help us with removal.  And as predicted, Dorris was completely placid and compliant and didn’t suggest a single hint that she would dare strike out at the Boys in Blue.  However, the police backed us up nicely and gave us one of their newbie officers to sit with me and Dorris in the back of the Ambulance.

Once on our way to hospital, Dorris’s demeanour changed.  Dramatically!

Whether it was the alcohol, her medical condition or just something in the air, our patient decided now was a time to make sexual advances.

Again, I won’t go into any graphic details but let’s just say there were moments of full exposure, several attempts at self gratification and numerous demands upon me to help with her self gratification.  Thakfully, Dorris was strapped down to the bed and I was able to fend off her sexual onslaught with pathetic retorts of asking whether or not she liked the Abba tunes I had playing over the speaker.

The newbie Police Officer, sat directly behind Dorris, couldn’t have shrunk further back into the partitioned wall if he tried.  His facial features betrayed the utter fear that was within him.  Matt, driving, was in hysterics and true to any friend witnessing a mate in distress, helped the situation linger by slowing down and prolonging my torture.

Eventually, we arrived at hospital.  But even as we were waiting to hand over, Dorris continued her behaviour much to the bemusement of those around us.  But thankfully, by the time she was on the hospital bed, whatever was giving her the energy to go wild had worn off and she fell into what appeared to be, a peaceful sleep.  Thank bloody goodness!!!!

The Police Officer who accompanied us still had terror all over his face.  And I strongly believe he has been suitably scarred for life after that one.

*not his real name or course

**not her real name of course