My breathing quickened and shallowed.  I was aware that I was becoming sweaty and that my arms and legs were feeling like lead weights.  Tingles began to creep from the ends of my fingers through my hands and slowly up my arms.

Slumping further into the chair, I desperately tried to keep my head up but waves of nausea began to take control.

“You sure you’re alright Binder?  You really don’t look well you know.  I think we should get you to lie down”

And before I could give myself in to a good old fashioned fainting, the HART* guys picked me up and ‘assisted’ me to the mess room sofa where I lay for the next half hour slowly recovering.

An hour after taking my first round of Post Exposure Prophylaxis medicine and I was reduced to a gibbering wreck whereby my “life” had just been saved by HART.  Oh, the humanity. 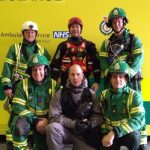 Earlier that afternoon I was attending a nondescript heroin overdose in an equally nondescript public fast food outlet.  As I was on my own with no immediate back up, I was left with the only option to treat the patient where he slumped – in a window seat, in front of everyone.  And as is the norm with these sorts of jobs, no one took a blind bit of interest in the scruffy, homeless looking man, sat half in and out of consciousness.  Everyone simply continued to eat their food and go about their day.

Not to interfere with the status quo of the establishment I kept things simple and went for an IM injection of Nalaxone** to the patient’s upper arm.  And, after administering the drug I went to dispatch the needle into my portable sharps bin attached to my bag.  At the very moment I flipped the lid and went to drop the needle in, the patient jolted and kicked the table.  This in turn jolted my bag.  Which, in turn, jolted the sharps box.  Which, in turn, caused the needle to stab my thumb.

I immediately stood up, horrified by what had just happened.  Staring at my gloved hand I waited for the blood to show . . . nothing.  Maybe it hadn’t really happened, I thought.  I wiggled my thumb . . . still nothing.

The patient was coming round now and my attention was taken up dealing with him.  And before long the crew finally arrived where I was able to hand him over and let them lead the patient away to the ambulance for some further checks.  This left me to clear up and recheck my thumb.  It was throbbing that unmistakeable feeling of being stabbed by a sharp, and as I peeled off the glove there too, was the unmistakeable blood stained markings of a needle stick injury.

. . . was all that kept going through my mind.  And over and over again I kept thinking of what was inevitably going to happen as a result of this.  Could I leave it?  Low chance of infection after all through an IM injection.  Did it really matter?  Each time I tried to convince myself it would be ok, each time I came back with the “what if” argument.

. . . I screamed inside my head again.  Whilst externally I smiled at those around me, making sure no one could see the anger and despair in my face. So, collecting up my stuff I rushed to my car, dumped my kit, washed my thumb thoroughly, and walked round to the ambulance and knocked on the back door.

The crew let me in and I stood there for a couple of minutes watching how the crew were interacting with the patient.  He was a simple polite looking man and wasn’t offering any aggression or troubles to the crew.  And, in turn, the crew were polite and helpful.  The patient was a long term Heroin user and as usual, didn’t want to convey to hospital.  At this point I interjected, explaining to the crew what had happened and asking if I could try and persuade the patient to attend hospital for a test.

I knelt down and carefully explained my fault in obtaining a needle stick injury to the patient.  And then explained it would help massively if he would attend hospital to have a blood test, to help me decide on my next course of action.  However, no matter what we did to persuade him, the patient refused to go, becoming insular and dismissive the more we tried.  Meanwhile, the paramedic on the truck had called our support desk and was discussing options with them and pretty soon we able to try a different approach.

“Would you allow us to take some blood from you?  So we can get it checked at hospital?  This way you won’t have to go.”  To this the patient agreed – so long as we were quick, as he wanted to go.  So, we got the patient to sign a written statement saying he was ok with this, OK’d it with the local hospital, and set him up to take some bloods, of which, the other paramedic would do.

Just as he was opening the cannula, my phone rang.  It was the support desk.  They were relaying that someone higher up was saying no to the procedure.  I stood up in shock and tried to explain everything was covered – that the hospital were fine with it and that so was the patient.  But sadly, the support desk continued to relay the words of higher up, ie they were saying “no!”.  As my voice heightened, the patient, sensing the break in momentum, ripped off the tourniquet and started to leave the ambulance.  He’d had enough waiting. Watching him leave the ambulance and knowing there was nothing we could do, my voice lost all emotion . . .

“. . . and now the patient is leaving.  He’s gone now.  That was my only chance in finding out where I stand.  I don’t have any choice now. Cheers hey.”

I ended the conversation and put my phone away and watched the patient walk off.  Turning back to the crew, I think they recognised my desperate look.

“I’m sorry fella,” the paramedic empathised, “what a croc of shit”

After taking some details I said goodbye and headed to the hospital where my team leader was going to meet me.  I now needed to have my own bloods taken, and then decide whether I take a course of Post Exposure Prophylaxis medications.

The hospital were great, and talked me through the whole procedure carefully.  They explained the factors involved in my needle stick injury and albeit the patient was high risk, the chances of contracting a blood borne illness was incredibly small.  However, it was still a risk.  And sadly, not one I could expose myself or my wife to by taking a chance.  Therefore, I agreed to start taking the medication. 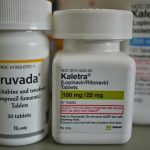 The doctor explained that I would need to take the two different medications for 28 days.  And contrary to prior beliefs, PEP “wasn’t as bad as it used to be”.  Hmmmm, we’d see.  I thanked them for their help, caught up with my team leader and agreed to meet back up at station.

Once back on station I went up to the offices and explained the story, asking my team leader at the end, whether they would be able to find out why the decision was made not to allow us to proceed with the bloods.  I then took the first lot of the medication and went to the mess room to start the Datex Report explaining the mishap.

An hour later, my team leader returned and they started explaining why it had all gone pear shaped.  The reasoning for the denial to take bloods was based around miscommunication and missunderstanding of the situation.  It was believed I was alone with the patient and possibly in the toilets with them, therefore, it was deemed inappropriate to allow me to take bloods.  That thinking was fair enough and I understood that.  But before I could start questioning this and challenging how they hadn’t realised I was with the crew, I started to feel the first effects of the medication.  Nausea.  Horrible, debilitating nausea.  Complete with weakness, dizziness and generally feeling like shit.  I had to cut the conversation short and headed downstairs to the mess room where I promptly slumped down in one of chairs – in front of HART.

After my embarrassing rescue by HART, I was able to get up and think about going home as it was coming near to the end of shift.  Two of my team mates had just arrived back from their shift and were horrified I was even still here.  So, they promptly set about getting my car keys and whilst one drove me in a service vehicle home, the other followed in my car.  We only had to stop once en route, so that I could throw up out of the car.

The side effects of the PEP continued for the next couple of weeks, slowly subsiding until my body became more used to the drugs.  And all the while I was on PEP I was signed off from work.  On top of being ill from taking the medication I had to have regular bloods taken at intervals, with the final set taken at three months post exposure, giving me the all clear.  But, during those three months, I also had to use “extra protection” with my wife!  So, all in all, the whole process was demeaning and horrible.

PEP is a truly horrible set of drugs to be on, and I’m sure most folk who have taken it understand.  I’d have hated to have taken its predecessor that meant I’d have been sick for the whole 28 days.  I do not recommend this experience to anyone and highly suggest you are more careful than I am.

There We Are Then.

*HART – Hazardous Area Response Team.  A sort of hybrid of paramdics/emt’s and the fire brigade.  See the description in “Lingo” section.