I was Green Mobile (ready for a job) in the Red 1 Only period of my night shift.  This means it’s the last fifteen minutes before the end of shift (in the unlikely event you didn’t get a break) and to give you a fighting chance of getting off on time you can only be given the calls that are almost guaranteed “not breathing” or “cardiac arrest”.  We call it the Red 1 Roulette.

The job came down as 55 year old, Cardiac Arrest.  But the interesting thing was that it was outside in one of the most busiest and well frequented-by-tourists areas of London.  At first – and you always are sadly – I was very cynical.  An unresponsive 55 year old?  In a busy touristy area?  Probably called by a “passer-by”?  Hmmmm, this smelt of a typical drunk to me . . . and to think I was being given this right at the end of my shift. 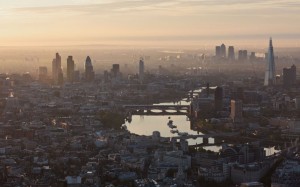 None the less, I belted it round there as fast as I could but was still beaten to line by a truck and another FRU.  The patient was lying on their back and was dead.  Proper dead.  As in, they’d been down a while.  The FRU was in the process of getting a rhythm strip from an ECG to show the classic flat-line of ‘Asystole’.

How could we tell?  And why hadn’t we started CPR?  Well, apart from the obvious lack of breath and no pulse, the poor man had what we call “Postmortem Staining” or PM Staining for short . . . it’s real name is Livor Mortis.  When a person dies, the blood is no longer being pumped round the body and instead ‘sinks’ with gravity to the lower reaches of their body.  This takes the appearance of blue purple staining anywhere on the lower parts of the flesh.  It is futile to start or continue any CPR at this stage.

Our patient had been on their front so when he was moved over it was obvious.  To add to this, rigor mortis was just starting.  We guessed they’d been down at least a couple of hours.

A blanket was obtained and laid ceremoniously over the poor man and Police were called.  There was nothing further we could do.  Thankfully, it was still very early in the morning so not too many ‘passer-by’s’ were gathering and staring.

Once the Police arrived the Ambulance crew and myself left the other FRU to do all the main paperwork . . . we were X-Ray (meaning our shift had finished) but the FRU still had half an hour to go – so it seemed fair to all of us that he complete this one.  With lots of thanks we left him to it and went our seperate ways.

This job both puzzled and saddened me.  We receive thousands of calls each day – lots of these are from ‘passers-by’ who call concerned about some drunk in the street.  Invariably they think the drunk is dead.  We arrive, wake the drunk, move them on or take them to hospital and the ‘passer-by’ feels proud of them self for doing a good deed.  London never sleeps – ever.  Yet here was a man who lay dead possibly for several hours in a busy area  and not a single soul had noticed or raised the alarm.  The irony of the one time it really mattered was astonishing and the odds of this happening were outstanding.  Yet the result was very very sad.