Hang on.  Let’s stop right there and rewind back about thirty minutes.

I was stood beside a towering policeman listening to a scrawny drunken Shoreditch trendy rant on about his broken bicycle and careless drivers. 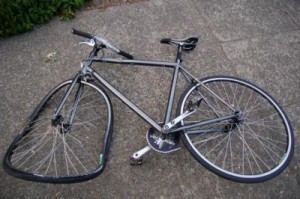 And on and on and on he went.  Relentlessly complaining about how he’d only had one pint, was on his way home on his bike when a car forced him off the road . . . and then driven off, not stopping.

The officer’s face was award winning.  Utter disinterest.  Thousand yard stare.  Lost completely in his own private “happy place”.  Eyes entirely glazed over.  Not an inch of movement or sympathy.

I however, smiled and nodded over theatrically at our patient – with only a hint of sarcasm.  The trendy’s chin was torn open but no bones appeared broken.  The bleeding had stopped and he was clearly going to need stitches.

Finally, a police van arrived to cart off the trendy’s bike to a safe place so as I could convey the patient in my car to the hospital just up the road.  It was after all, a ridiculously busy night and there were absolutely no trucks to send.

After saying goodbye to the police we set off.  The trendy was still at it though . . . yapping on about his rights and how dare drivers get away with that sort of behaviour.  Eventually, I interjected . . .

“Tim*.  You do know that copper had told me that they’d looked at the CCTV footage of what had happened.  There was no car Tim!  Just you.  They said they watched you just plough head on into the curb and go flying over your handle bars.  It was your fault Tim . . . you’re pissed”

There was a long pause.

The rest of the short journey was, I’m pleased to say, in complete silence.

*not his real name of course