In reality it’s not often we have problems with Trumpton and on the whole we have good relations with them . . . but . . . sometimes you just want to hit your head against a wall.  I’d hit their head against the wall but comparing the size and build of me to them – it would be a rather foolish thing to attempt. 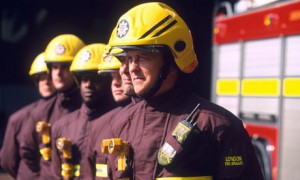 It was coming toward an end of a long night shift when down on the MDT came an odd job requesting Police and LAS assist LFB on scene.  The details were ambiguous to say the least . . . something to do with a possible “collapse behind closed doors”.  Of course, seeing as this had come from our ‘brethren’ I immediately thought it must be serious so raced round there . . .

I arrived at the same time as the Police car to find Pet Rescue parked outside some flats with a rather upset woman stood with them.

The White Hat approached us.  With LFB there is a very disciplined and effective line of control – everyone in Yellow Hats (the Borg collective) are controlled by their Team Leader who wears the White Hat . . . all commands and communications come via this person – else you will be assimilated!

“Right.  This woman has been locked out of her flat.”  he gestured toward the crying woman,  “This isn’t a job for us so we’ve called you guys.”

The booming voice of the towering White Hat was more a righteous declaration than point-de-conversation.  The attending officer – looking more like David facing Goliath – stood passively on.

“There’s nothing we can do eith-“

The officer was cut off by the White Hat squaring up to him.  Suddenly there was “an atmosphere” in the air.   One I don’t like.  The “Borg” started rallying round White Hat and his voice had turned to an almost threatening below.

“We’re NOT happy that this woman is left on the streets!!!  She NEEDS help and I WANT to know that she’ll be kept safe!”

I found myself cowering behind the smaller female officer, getting myself prepared to use my very special self defence skills – by shrieking PLEASE – NOT MY FACE!!! 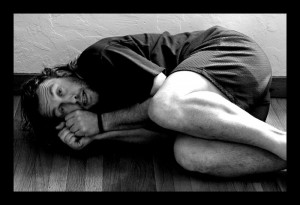 Give the attending officer his due – he squared up equally to White Hat – but being several meters smaller, his voice was not as bellowing or deep . . . sadly, just a little more shrill and high pitch.

“Hold on!!  Let me finish!  Of course we won’t leave her stranded and we’ll most likely take her back to the station.  But there’s nothing we can do for her situation is what I’m trying to tell you.”

White Hat’s nostrils seemed to relax and after a few moments of cog grinding and thought process he appeared to accept this outcome.  Signalling to the “collective” with a nod they all boarded their passion wagon and departed, leaving us standing in the quiet and empty East End street with the crying woman.

I unwrapped myself from my foetus position hidden behind the police woman’s legs and stood up tutting.

I then stood on for a short while and listened to the Police try and sort out the woman’s dilemma . . . she was a Septic Tank* who’d arrived in the country yesterday but now a flat mate had put the dead bolt on so she wasn’t able to get in.  And no one was answering the door or phone.  She was very, very upset.

Eventually I mentioned that I’d be off – apologising that I couldn’t be of any assistance.  They smiled warmly and waved goodbye.

I felt bad.  Not so much for the woman . . . meh!  These things happen.  But I felt bad for the Police.  I felt bad that I couldn’t assist them this time round.  I like trying to help them out – god knows they help us out often enough.  And I felt bad that they were ultimately dumped in this situation by – of all people to do so – the LFB.  And not in a particularly friendly manner either.  I felt bad that the Police are always dumped in these sort of situations and left to pick up pieces.  And are expected to never bat an eye lid at their lot.

So, it’s so true when I say, I really couldn’t do your job guys.

As for the LFB . . . we jest and jape all the time about them and get on generally quite well.  It’s just these isolated situations that leave us all with a bitter taste in our mouths.  Still I hope they were able to get back to their beds . . . or Borg charging chambers – I’m not sure which it is.