The young teenager cried and looked sorry for herself.  She’d been attacked in the street by some older lads – they’d repeatedly struck her with scaffold padding and she’d inevitably held up her arms in defence.  Now, back at her home she was complaining of immense pain in one of her forearms.  There were no obvious signs of a break and she had good movement in her hand and arm.  However, feeling sorry for the poor girl I uttered my next suggestion without first considering it’s inevitably disastrous consequences . . .

“Would you like me to put your arm in a sling?” 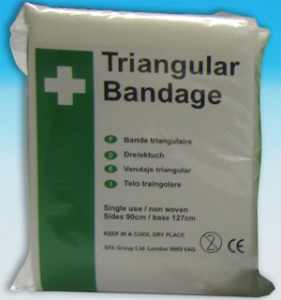 Wiping her snotty nose and stifling her tears she nodded.

Damn it!!!!  You idiot Binder.  Think before you speak next time – you fool!!!  Too late now though.  So, pulling the terrifying alien object from the dressings bag and holding it in front of me, as if it were a bomb about to go off at any moment, I took a deep breath and opened it.

Standing behind me was the patient’s mum.  Smoking a dozen fags at once she looked on unimpressed.  Beside her, trying to take a statement were two well seasoned police officers.

What followed next was a slow but precise descent into absolute crushing failure.  I turned the triangular sheet this way and that.  Backwards and forwards.  Holding it up to the patient here and there.  Each time coming back to the same conclusion and attempting to tie it in an incorrect position.

And the more I kept repeating this mistake the more inwardly panicked I became trying to cover up my failings by speaking loudly.  And the more I spoke loudly the more the mum and police started to take note of my incompetence.

I was going red.  Very red.  The police had stopped talking and the mum’s eyebrows were completely furrowed in disbelief.  Yet still, I kept attempting to tie the bloody thing wrong!!!  I mean, really – where WERE the bloody St John Ambulance when you really needed them!

Eventually, one of the officers put me out of my misery and carefully talked me through the process of tying it properly . . . just as a bloody St John Ambulance crew arrived!!!

I quickly handed over to them explaining my exploits over the sling horror and went to leave.  The attending “Jonnie”, looking at the patient and my sling attempt, smiled and touched me on my arm.

Utterly crushed, defeated and humiliated I left as quickly as I could.  The dreaded triangular bandage wins again!