A twenty two year old having a stroke is highly unlikely . . . but not impossible I imagine.

However, forgive me for not feeling a surge of adrenaline when the job came down as “Red 2.  CVA.  Weak, numb, head pain”.  So, I brushed off the thousands of pistachio nut casings from my lap into the drivers well, put on my seat belt and sped off toward the job.

When I walked into the flat the mum of the patient didn’t appear overly worried – just puzzled at her son’s symptoms.  This was partly because it wasn’t a life or death situation but mainly, I suspect, due to the fact it was a 111 referral!  The mum led me through to a darkened living room and gestured toward her son, who lay on a mattress by the window looking very sorry for himself.

This is where your A B C’s and History-taking come into play.  The A B C’s are done almost immediately as you set eyes on the patient and from this you can almost always judge whether it’s time critical or not . . . ie need to get a shift on.  If it’s not time critical, you slow everything right down to a chilled out pace and move casually onto History.

A good history will reveal a plethora of social, family, mental and psychological issues on top of the simple medical issues they are presenting with.  All of which add up to a generally good diagnosis.  And this ultimately and hopefully leads to the correct course of action and appropriate treatment being made for that patient.

In most cases for us however, this simply means a trip to A&E via the big yellow taxi!

The A B and C’s in this instance, were absolutely fine.  So it was onto the history . . . he’d recently been complaining of head pain around one of his eyes.  And a few days ago his dad suggested he go to his Dentist instead of his GP to have it checked out.

“You went to your Dentist?!”  I interjected incredulously. 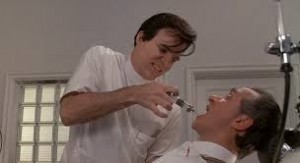 The young lad spoke softly and moved as if in slow motion, his eyes half shut.

The mum stepped in this time, “They did an X-ray but didn’t find anything.  So they gave him these.”

She handed me two boxes of pills – one, a super strong antibiotic and the other, Dihydrocodeine 30mg.  My eyes widened.  Dihydrocodeine?!  30mg?!!!

I laughed.  I didn’t mean to but I couldn’t help it.  Sensing a little confusion in the mum’s face I rallied.

“I understand that Codeine in general is not a good choice for headaches.  In fact I recall being told by a Doctor at hospital that it can sometimes make headaches worse.   However mum, I will wager my wife’s beautiful hair that this is a result of your son taking these tablets”

I held up the Dihydrocodeine as exhibit A.

“What should we do?”  The mum asked sighing.  We both looked down at the son’s pathetic attempts to reach for a glass of water.

“We could poke him with a stick”  I ventured.
“What?”
“Well, he won’t feel anything.  Those pills are super super strong pain killers.  He’s on cloud nine I reckon.  It’d be fun”  The mum giggled.

At that moment the crew arrived.  And after a brief handover and display of “exhibit A” we all had a further chuckle before helping the son up to his feet and floating him down to the Ambulance.

“Will he be ok do you think?”  The mum asked as I helped her onto the truck.

“I reckon so Mum”

“What about his headache?”

“Probably some paracetamol should do the trick.  See ya”