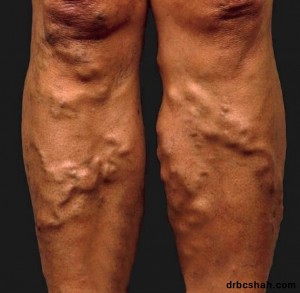 The MDT said “pool of blood” and sure enough, when I entered the kitchen, there was – a pool of blood.  A large pool of blood.  Large enough that others had been slipping in it and smearing the blood everywhere with skid marks.  It had also been traipsed throughout the house via footprints.  Basically, it was one of those “spill a pot of paint, stand in it and walk about before you know it” type episodes.  If it wasn’t so . . . red, I might have been tempted to change into board shorts and take a dive in.

My patient, a charming yet slightly embarrassed old man, sat on a chair in the middle of the pool of blood – as if on an island – with one leg up on a stool, holding a dish cloth against his lower leg.  In this position the bleeding appeared to be under control. 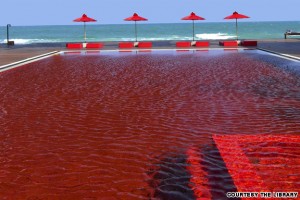 “I feel terribly embarrassed about all this and really didn’t want to call . . . but, well, as you can see, it doesn’t appear to be getting much better.  I’m awfully sorry.”

I love old folk.  To me this is hardcore.  Here you have a gentleman who, by all accounts, has lost a considerable amount of blood yet still apologises to us for the inconvenience.  You’d hardly ever get that in the younger generations.

The old gentleman went to take the cloth away to show me his wound.

“Wo! Wo! WO!”  I said, holding my hand out in a “STOP RIGHT THERE” fashion.  He may think the bleeding has stopped but from experience, I know better.

I edged round to him, carefully trying to avoid any deep patches and using what ‘dry land’ areas I could find.  Then, crouching behind my patient and peeking over his shoulder – not even attempting to disguise the fact I was using him as a human shield – I asked him to carefully and slowly peel back the cloth.

He did as I asked and revealed a lower leg riddled with large varicose veins but with no obvious sign of a rupture point and thankfully, the bleeding had stopped.  With a sigh of relief I stood up and patted him on his shoulder.

But it was too late.  The moment the gentleman touched the wound it reopened and sent forceful get of venous blood up into the air . . . right across my mouth, neck and shirt.

The old man immediately put the cloth back over the wound.  “Oh.  I’m terribly sorry about that old chap”.

Spitting out a lump of warm blood I turned to the dressings pack.  I pulled out a dressing, cut it down to size, rolled it up into a tight 1cm ‘ball’ and turned back to the patient.

“Right.  Let’s sort this out!”  I carefully pulled back the cloth and immediately placed the dressing ‘ball’ onto the wound before another burst could break free.  Keeping the pressure on the wound I wrapped a self-adhesive bandage round his leg to finish – et voila.  Done.

At that moment the crew arrived.  Stopping at the kitchen entrance they surveyed the scene – first they looked at the pool of blood, then at the patient, then at me.  Their amusement was not being hidden.

“Who was trying to kill who?”  They quipped.

And after a short struggle in avoiding the blood we got the patient into the ambulance ready to be safely conveyed to hospital.

Spitting out another lump of blood I radioed up Control to return to base and change my uniform.