I appreciate this entry isn’t directly involved with the paramenacing world.  But it did involve a hospital and it did make me chuckle anyway.

I was sat in my local Hospital’s A&E waiting to be seen over a suspected cracked rib.  This time I was the patient and as such I attempted to blend in and hide as best as possible – especially whenever an ambulance crew came in (oh, the embarrassment).  In hind sight I think sitting nervously crossed legged whilst desperately trying to hide my features with a newspaper and hands – as the surrounding public slowly edged away from me as if I were about to explode – was not the most effective method of disguise.

I’d not been waiting long before being called through to the Minor Injuries department.  A short round man with a stethoscope about his neck introduced himself as a Junior Doctor and in between simple questions based around my pains in my chest, appeared to massage and caress my man boobs – under the guise of “examination”.  After a long conference with the Consultant Doctor he returned with his verdict and diagnosis.

“Yes, we reckon you’ve cracked a couple of ribs there.  That would explain why the pain hasn’t receded over the past week.  How did it happen again?”

I explained once more . . . how I’d been mountain biking in Europe and had landed badly after doing a jump.  The “jump” this time had been exaggerated to a 40′ cliff with a 1000′ drop either side . . . whereas, in reality, it was barely a 3′ ramp, on flat ground – and others would say that was still an exaggeration.  I’d landed badly and had managed to impale myself on the handle bars.  I was, in fairness wearing arm and leg pads and a helmet with a face visor – but this offered little support to my chest and shoulder that took the brunt of the impact.

Hopping up immediately from my 400mph crash I started skipping about in that fashion when someone’s whacked their coccyx or had been winded and, gasping for air, I tore at my padding to get it off.  Someone asked the golden question of inevitability . . . 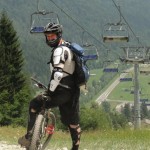 About twenty minutes after cracking the ribs, full body armour is sought and used . . . probably not the best timing . . .

The Junior Doctor  listened and nodded to my heroic tale of adventure, as if interested (he wasn’t) and moved swiftly on to something he thought was more important.

I explained this one too . . . a few days after my 500mph mountain bike crash off a cliff I’d set off to climb a mountain with a friend of mine, Nicky.  Unfortunately, regardless of the “good” weather reports we’d had about that day, we got caught in a freak thunder storm at the top.  This wasn’t good and the deluge of hail stones that fell about us as we tried to run down caused the lime-stone slopes to become like waterfalls.  And then there was the lightening . . . this crashed around us everywhere.  At one point, there was a sudden break in the cloud someway down and we could briefly see where we were heading (and that it wasn’t too far).  However, this good news was instantly destroyed as we witnessed two lightening bolts hitting the ridge line below us whilst another hit a car in the distance near where we were parked. 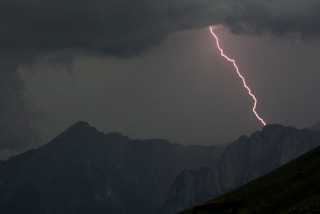 Just one of the lightening strikes that hit our mountain during our descent. Photo courtesy of Richard Maywhort – who, realising rescue attempts were futile, did what any other person in his situation would do . . . take photos!

As the cloud and rain closed in again we gritted out teeth and raced on.  And then . . . an ear deafeningly loud bang.  So loud, my ears were left ringing.  At the same time I felt a punch to my chest via my left hand which was touching the rock face for support.  It was a punch that instantly took my breath away and halted me on the spot.  In that split second I’d seen this bolt striking about 20 yards up to our left.  When it does this it dissipates across the surface electrocuting whoever is luckless enough to be in its way . . . and that was us!

There was panic on Nicky’s face now, as she’d been hit too.  If there was ever going to be a moment when someone would freeze in fear, this would be it.  I had Nicky on a rope for safety and had instant visions of having to drag her off the mountain.  In stark contrast to my thoughts, Nicky let loose the inner beast and started to spring down the slopes like a Gazelle, practically dragging me on the rope, like a tired hapless dog behind her. It was all I could do to keep up!

“I WANT OFF THIS FUCKING MOUNTAIN RIGHT NOW!”  This was all I got from her until we hit safety further down.

The lightening continued to strike around us as we descended making us grit our teeth and  pray that the next one didn’t hit us directly.  And it didn’t let up until we were onto the easier slopes that led to the car, where we were able to relax.  Only then did we start to laugh about it – and laugh hard!

The Doctor seemed genuinely concerned, “When it struck you did you feel your heart racing?!  Or any palpitations?!”

I looked at him for a few seconds, “. . . . possibly yes Doctor.  But to be honest, we were in the process of legging it off that fucking thing.  We weren’t about to hang about and measure each other’s pulses”

So, I’m currently being an absolute wimp – currently signed off with “light duties”.  This means I’ll most likely be in an office somewhere making folks cups of tea and coffee . . . which is all I’m good for really.  However, I’m sure I’ll be chomping at the bit with this, so hope to negotiate getting back onto front line duties as soon as possible.

We’ll see . . . stand by.  I’ll report in any traumatic paper cuts or repetitive strain injuries from typing as time goes on.

2 thoughts on “What about my ribs?”