The other morning I passed yet another cyclist treating their life with careless disposition.  He must of been about 18 and was riding no handed – ie, one hand tucked deep into the pocket of his tight Shoreditch Trendie jeans whilst the other held an iPhone close to his belly.  On his head were thick ear muff head phones plugged into the phone and as he peddled along the ridiculously busy road in central London he merely had his head down and concentrated on writing a text. 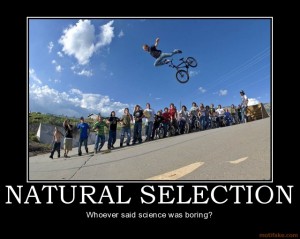 The crowning glory of this fool was when he rode straight through a red light and across a junction – forcing cars to screech to a halt before being given the chance of annihilating him on the spot.  And how did the young idiot react to this?  With his headphones on and head down, he didn’t even bloody notice!  Just carried on his merry way . . . the daft twat!

Now, this made me think . . . here was a lad who is clearly pushing the boundaries of extreme living.  He’s going places . . . possibly not college, but places.  But, I reckon his days might just be numbered. 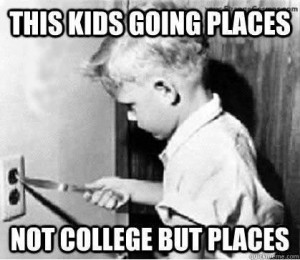 So, what happens if and when the inevitable happens?  We get called out don’t we.  And we do our utmost best to save this poor young fella’s life.  And in this day and age of new and wondrous technology we might even be successful.  Hoorah!  Another tax payer brought back to tax paying status!

But hang on . . . we’re interfering with Natural Selection aren’t we?  Isn’t it written somewhere “only the strongest shall evolve”?  So, by saving the lives of random fools, such as “texty trendie” here, we are by very definition, tampering with Nature’s golden plan.  And worse still, by keeping these delightful creations within the realms of procreative ability, they end up multiplying . . . thereby adding further hindrance to effective evolution and possibly resetting the human population on a course that could signify inevitable self destruction! 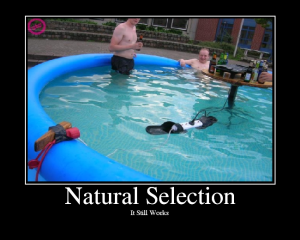 Of course, such philosophical leftism (or rightism depending on your stance) would never interfere with my decision to help an individual – EVER!  No matter how “natural selected” they may be . . . but it does make you think hey.